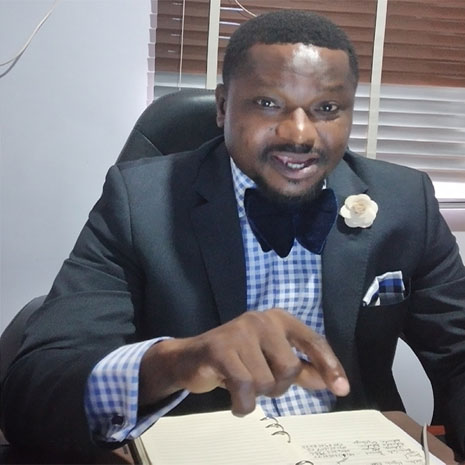 Fertility News
May 5, 2021 by OmegaGolden 0Comments

Describe your venture on into fertility treatments, management?

Becoming a force in the fertility service industry started 17 years ago when I left the university and was privileged to work with a fertility centre in Lagos. I started as a Trainee Embryologist precisely in 2004 and rose to through the ranks upon several trainings overseas to become a Deputy Head of Department (HOD) at the fertility centre in Lagos to the glory of God. The record remains indelible in the clinic till today as the only person to win the star performer embryologist. At the time, I broke the record of three years in one year. I later travelled to the United Kingdom for further training and specialization in modern male infertility treatment options and did my postgraduate at the University of Leeds, United Kingdom. During the course of my training, I visited the Centre for Reproductive Medicine, St. Mary’s Hospital in Manchester to obtain the latest technology that is IMSI Observership training. Intracytoplasmic morphologically selected sperm injection (IMSI) which is for male infertility cases. I further moved on to University College London to train on advanced technologies in In-Vitro Fertilization (IVF) and also learnt Pre-implantation genetic diagnosis (PGD). This has to do with investigating embryos, knowing and getting acquainted with the latest advances in human fertility treatment. So we do what we call PGD training to check an embryo of a woman before putting it into the uterus.

Why do you conduct an investigation of an embryo?

PGD investigates to know which embryo has a defect(s), which might not have a chance of continuing the journey of nine months. The objective is to check which if an embryo is physiologically competent to continue the journey of nine months. If a couple is both AS genotype and they want to have a baby that is not SS, PGD is done to investigate which of the embryos is free from the SS gene. So you investigate the embryo to see which one is the AA gene and which one is free of the sickle cell gene. You also could get to know the sex of an embryo at this cellular level. This is because some people not everybody is really having difficulty getting pregnant. Some people get pregnant and delivered the baby, but they don’t have the sex of the interest among the babies they have. Maybe they have all-around boys and there’s money and the man just wants to please his wife by having a daughter. So, we put in a female gene embryo so that they can deliver the baby girl. Some people have five girls and they just want a single male child, so you have to investigate the embryo to check which one is carrying the Y chromosome.

So, it’s possible to check the embryo for the sex that is of preference to the couple. If they have the money to afford the services and they have interest, it is very imperative to look at the embryo to offer them what they particularly deserve. So, you check the embryos for them, whichever one that is the XX, XY chromosome carrying embryo is the one you’re going to transfer into the woman. God helping us if the cycle succeeds, you are 99.9 percent close to having a baby boy, if the pregnancy goes to term. And at that point, the family will say they’re completely fulfilled.

Basically, as at the time I was going for that training, I was already a deputy HOD of a fertility clinic and the regular routine of doing a treatment cycle and IVF treatment cycle, getting a woman pregnant was no longer a challenging thing. It’s something we do on a regular basis, and God is answering the prayers. However, we realized that some couples who approached us for treatment did not do so because they cannot get pregnant. However, they approached us because they don’t have the preferred sex of the child they wanted. So, they want to balance their families, to have a baby girl or a baby boy that is lacking. So, we realized this area of the business need for Nigerians. Since science and technology have provided such skills, we paid to acquire them, we got the training and now we are giving back to the society.

When you talk about male infertility treatment, you are talking about a situation wherein a woman has been diagnosed to be completely fit, gynecologically. That is, she is able to conceive, but for whatever reason, her husband’s sperm are sub-quality, either in terms of the count or the competence to fertilize the egg of the woman. So, you get to address this by working with what the man has to make sure the man has 100,000 sperm cells that do not meet the World Health Organisation (WHO) requirement.

The WHO says a man should have 15 million sperm cells to be a father. So, you have to assist the man that has 100,000 sperm cells to have the same chance as a man that has 200 million or 80 million sperm count such that he can get his wife to conceive and they have their own biological children. We now realized further that even while you do that, we still see in couples who get embryos transferred into the woman at end of the day, the woman still doesn’t get pregnant. You find out that everything on the part of the woman is on point. She’s fit.

So, you subject the man’s sperm to further advanced investigation, which we call the IMSI, Intracytoplasmic Morphologically Selected Sperm Injection, wherein you want to see this sperm of the man in further details unlike the regular ICSI that you do. You will now use a high-power microscope in the power of 6600 – 8000 times to see the ultrastructure of the sperm head because the sperm has the head, the neck, and the tail. In this case, you want to see the ultrastructure content of the sperm head. And with that, you’ll be able to see whether there is what we call fragmentation in the head of the sperm. This is because the contents, the seed of life from a man is just in the head of the sperm, every other part of the sperm just plays one role or the other, but the reproductive part is the head that contains the DNA.

So, you check to see vacuoles over the head of the sperm. So, there’s a high tendency that the typical seed of life which is the DNA of the man has been broken into pieces along the chain line. Where there is this breakage, such sperm cannot do the magic. They cannot go to through the duress of transition from embryo to fetus vis-à-vis nine months of pregnancy. And as such, such a woman will miscarry despite that she has been confirmed pregnant through tests. Two weeks or a little more after treatment, the pregnancy we still abort, because their paternal DNA, which is the seed of life from the man, has a key role to play in pregnancy development.

Worthy of note is that the woman is fit, gynecologically and everything about her is perfect. So, if the pregnancy doesn’t go to term that is she doesn’t succeed all indication points towards the man. With this experience you want to dig further to see what exactly is not making this treatment to succeed. So, when you do sperm DNA fragmentation or IMSI, you are able to tell that. And with a couple of medications here and there, you are better able to put the man on track. At the end of the day, you put a smile on the couple.

Why do you think Nigerians should be interested in male infertility treatment?

The point is that the time and season have changed. The era of barrenness has long gone. There was a time when people lived their whole life not having any option but to go to Church or native doctors looking for the fruit of the womb. Meanwhile, I’m of the opinion, spiritual matters are handled by spiritual homes. But medical issues should be addressed by health professionals. So, when they go to health professionals, what they do not know and was not told in the Church or mosque is unveiled through medical investigations and treatment – that this is actually the problem. And the next is, what can we do? As the saying goes, when you know the problem, it is half solved. It’s another thing if you cannot afford the treatment, you can go build your account to afford it.

However, when you know what the problem is, the next thing is to take advantage of the technological advances in the world, and invariably, you get a smile. Another reason for fertility services is time and season have changed as I said earlier. Women don’t leave University at the right time again. They look for jobs; the stress in the society is on a high level. This stress predisposes couples to infertility. That is the inability to get pregnant under twelve months when they have unprotected sex regularly, three to four times a week as a couple.

So, when the stress level is high, the sperm quality of a man goes down, the sperm count goes down. When the stress level is high, as you can see the economy is hard now everybody’s pulling left and right to put the resources together. So, the woman is playing her role in the family to meet up financially. So, at the end of the day, there’s so much stress on the woman already. The stress can predispose her to hormonal imbalance; despite that the man is still very active in bed and his sperm is supposedly okay.

So, they have sex, but about four years into the marriage, there is still no child. They have attended vigils, they drunk olive oil, they’ve taken holy water; no pregnancy and child. So when this happens, the next is to go to the hospital, not just going to just a regular hospital or General Hospital, they should go to the specialist that can address their interest that are of concern to them, which is the fertility clinics. So, when they go to fertility clinics, they are furnished in training than the regular General or Teaching Medical Centre. In terms of their specialty, they are specialized to handle issues of reproduction.

So, what is not told conventionally in the regular laboratory and General Hospital is brought to the fore. The next thing the knowledge of the couple is illuminated. Now, they can ask the fertility experts, what do we do? The doctor would tell them, you need to do this, you need to do that and they take advantage of services. Two months down the line, the story is concluded and changed forever. And they are doing scans and having what we call EDD – expected date of delivery. So that’s why I think approaching the fertility clinics in the country is of importance at this age and time for the couples trusting God for an addition of a child in their home.

Kindly follow us on our social media pages for more regular updates: